My heart is sad. I am missing my baby on this special day. I can’t look back and reminisce special Thanksgivings in the past with him. I only have one I shared with him and it was when I was in the first trimester of my pregnancy. I only remember feeling so thankful for the new little life in my womb. I don’t have any “snapshots” in my memory of what this holiday was like with him in my arms, for we lost him too soon.

It is harder in some ways to have never had these holidays with him in our arms, because we don’t have pictures or memories of him here with us to help comfort us through the holidays. I know that memories of past holidays with loved ones lost are often described as bittersweet, but what is the word for how you feel when you never had the chance to make those memories?  As I mourn never having held him in my arms and never having seen him with our family on Thanksgiving day, I remember this one special moment with him…

I am thankful for the many times I took the time to stare at my sweet Silas to soak up all of his preciousness. Forever etched in my memory is one of those special times. I remember looking into his eyes and thinking…

Can you see how much I love you?
Can I just pour all of this love from my soul into yours as I stare into your beautiful blue eyes?
Can I possibly relate to you the depth of my love?

My heart overflowed with love for my son and I desperately wanted him to know how much I loved him, but the magnitude of the love I felt was indescribable. It was so intense, I almost felt my heart would break.

There were no words spoken between us in that moment. Our eyes were locked, staring so intently at one another. Silas answered all of my questions in the only way he could. I saw a flicker of love in his eyes. I was taken aback. I thought, did I really just see love in your eyes? He was nearly six weeks old at the time. Never had I seen a baby so young show so much love in his eyes. He was wise beyond his five weeks.

He was too young to say I Love You, but he gave me the greatest gift a mother could ever receive. Though I will never hear those words from his lips, I am able to say he told me he loved me. I know his heart heard mine.

***The photo above is one I am so grateful I took, for it is a view of him from my perspective as I would hold him in front of me as I drank in all the sweetness of his face.

I just don’t understand.  The one sentence I repeated over and over for days as I cried from the deepest, darkest place of my soul:

“My baby. I just don’t understand.”

The unanswered and the unknown can cause the most excruciating guilt.  I understand that the loss of my baby boy is not mine to understand.  Not every thing in this world can be explained.  It seems impossible to understand why a child should be taken from his mother, father, brother, and sister…and I will not try.

Even though I had been reassured that I could not and should not have been able to see that Silas was developing pulmonary hypertension caused by a congenital portosystemic shunt, I couldn’t shake the guilt. I hadn’t been able to protect him, even as he lay in my arms. I could understand that nothing I had done during my pregnancy had caused this, but I couldn’t understand why I hadn’t seen the subtle symptoms of pulmonary hypertension, even though those symptoms are similar to the breastfeeding jaundice he had, as well as that of being a sleepy little newborn in general. I felt that if we’d just had another week, we would’ve seen him fatiguing in the absence of jaundice and that would have clued us in to his condition. We weren’t given another week.

I know many friends had hoped the results of the autopsy would give us knowledge and peace. I was tortured by the results. Mothers are supposed to have a special intuition about their children’s health. Adding to the guilt was the thought that I’d had no inclination that he was going to leave us so suddenly.  In the weeks following receiving the autopsy results, I would listen to MercyMe’s “The Hurt and the Healer” on repeat, and I’m so thankful my cousin, Amber, shared that song with me for it spoke what my heart was crying.

I had to follow up with the liver specialist we had seen two weeks before his death. I had so many unanswered questions that were tormenting me.  I had to open the door to receive those answers in order to then close it and move forward.  Two weeks before he died, we had been sent in for a sonogram of his liver checking for biliary atresia because of his prolonged jaundice. They didn’t see the shunt on the scan. All of his lab results were progressing normally. We thought we had a healthy baby.

Silas’ doctor explained to us that Silas had two other problems detected on the autopsy. He had cortical dysplasia in his brain, another congenital abnormality. The report stated that people with cortical dysplasia can lead asymptomatic lives, but the doctor told us it can cause brain damage, cerebral palsy, and/or seizures. This condition would not have allowed him to be on the transplant list if he’d needed a liver transplant due to the portosystemic shunt. His liver was also fatty according to the autopsy results and had not been two weeks prior during the sonogram, and the doctor said that absolutely would’ve shown up on the scan. He is going to test Silas’ DNA for the possibility of a metabolic or mitochondrial disorder. We were told that each of these conditions by themselves should not have caused sudden death.  Currently, we know that having another child could present as low as a 5% chance and as high as a 25% chance of a metabolic or mitochondrial disorder reoccurring, but we won’t know for sure until the DNA tests have been completed. The doctor reassured us that is a low risk. He also reassured us our two older children are healthy. They stated that they would be running tests on any future children. I appreciated how they are going to be there with us in the future to help quell our fears.

The hardest question I had to ask Silas’ doctor was, “If you had known all of this information before he died, could you have saved him?” I had to ask, even though I thought my heart would break with the answer. I wanted him to tell me it was inevitable. I wanted to know my baby hadn’t died in vain. It would’ve killed me if he could’ve been saved. I can’t imagine the additional guilt I would’ve felt if it could’ve been caught.

The doctor said he felt Silas’ death was inevitable.

I don’t understand why my baby wasn’t created to live a long life on this earth,
but I do understand why I didn’t know he was going to leave
…and why I had to wait 10 months to conceive him.

I now know I wasn’t meant to see everything was going to go so terribly wrong.
I was meant to love and cherish every minute with my baby boy…
and I did…
with all my heart. 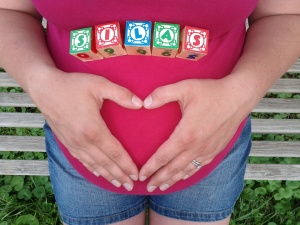 As I shared at his funeral, from the beginning of my pregnancy, every time I started to worry that something could go wrong, I was given peace and the thought to enjoy my time with my baby. I did my best as a mother and I left the rest to God. Little did I know that the One who holds tomorrow was giving me such an amazing gift.

He knew my time with Silas would be short.
He knew it was inevitable.
He knew, and He encouraged me to enjoy EVERY.SINGLE.MOMENT.

I prayed for a perfect little baby with dimples, and that was what I was given. His body wasn’t perfect, but his spirit was, and our time with Silas was perfect. 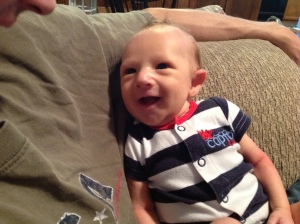 I had never been able to understand why it took 10 long months to conceive Silas until the day we met with the doctor. During those 10 months, I was so confused and frustrated. Were we able to have another child? Was I incapable of being a good mother to three children? What was God’s plan for our family? But, I knew I desired another child…two more to be exact…and I continued to hand my doubts back to the Lord.

Even though I have been blessed with an abundance of peace and understanding during an incomprehensible time of grief, I still mourn deeply.  I am grateful for the blessings, and even more grateful that my heart has been able to understand these blessings, for they bring me comfort, but at times that comfort is fleeting.  People may try to comfort me with the knowledge that his death was unavoidable in order to try to ease my pain, but the inevitability of his death doesn’t make it any less tragic or make it hurt any less.  I know it hurts my loved ones to see me hurt so much, but there is no way around this path.  It is the one I must walk, and I am okay with that, for a mother will do anything she must for her child.

Looking back at the timeline

, I see how our journey prepared my heart for what was to come. Since I waited so long for Silas to come into my life, I was extremely grateful once I found out I was expecting. I didn’t mind the aches and pains of pregnancy, though the morning sickness was so bad at times it had me second guessing my choice, but that all faded long before he was born. That ten month wait showed me that we are not guaranteed to have children in this life. I never took my pregnancy for granted. Waiting for a baby, my baby, had prepared my heart, and my heart embraced my Silas, and I soaked up every precious moment with my baby boy.

Now I carry him in my heart…

Teryn O'Brien
the one(s) i carry in my heart
Create a free website or blog at WordPress.com.
Loading Comments...