“Mommy, where’s your baby?” asked Milo as we came to Brittany’s house to pick up our children that night. I could barely stand as it was, and that question caused nausea to roil in the pit of my stomach. How do I help them understand when I don’t understand?

“Mommy, where’s my baby?” asked Milo the next morning.

How do you tell your son that his brother died and is never coming back in a way a three year old can understand? It was unreal, even to us. Milo and Lily had held their still brother, but Milo could not comprehend the permanence, and Lily barely could.

My first thought was to say his heart and soul left his body, but to a three year old who sees the world in black and white, how can a heart leave your body?

I placed him on the counter in front of me and looked into his eyes and said Silas’ spirit, the part of him that makes up the things he loves and the things that make him sad or happy, left his body and flew to heaven to be with Jesus.  Something made him too sick and his heart could not keep beating to keep him alive.

I explained the same to Lily when she woke to a home filled with grief. Lily had fewer questions than Milo. She often draws pictures of Silas and listens to songs that remind her of him. She cries, yet Milo doesn’t. They have different levels of understanding. I believe they will reach new layers of grief through the years as they begin to understand the reality of death.

My children often ask me, “Are you so, so, so, so, so, so sad about Silas?” I tell them I am so sad, but I’m so happy they’re here with me. Now, whenever they ask me that question, they say, “But you’re so, so happy I’m here with you?” I’m glad they know what’s in my heart.  It must be so confusing for them to understand how I love all of my children equally when I cry for one child who’s missed beyond belief.  Whenever I tell them I love them, Lily says, “And you love SySy up in heaven?”  He’s always included in everything they think, say, and do.  ❤

How do you explain heaven to a three year old?  …to a five year old?

But, even though he’s in all that glory, we still wish he were here. 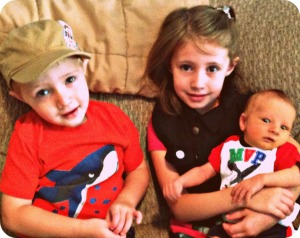 9 thoughts on “Mommy, where’s your baby?”